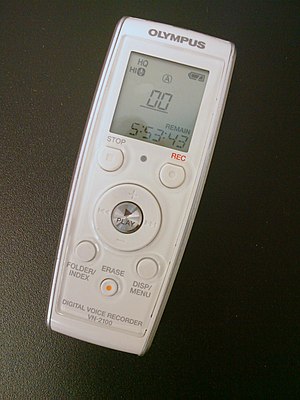 I very quickly ran out of room on the board, but I squeezed things on until the bell rang. While the students are filing out, I carefully noted down everything on the board on an index card, and used it for review, spot quizzes, etc., the next time. This also reminded me of what we had done in class.

I had been recording my classes with a lapel mic and a voice recorder, but I did not always remember to switch it on. Plus, the recordings have been piling up unedited on my hard-drive, waiting for me to get around to posting them on this blog. (I want to see if students will access the recordings and/or find them useful: it could be a way to “revise” before the final exam.)

Then there were a couple of classes when I had to leave in a hurry because the next teacher was waiting to use the room. I had no record.

Today, I spent the last 10 minutes or so of class giving a dictation of sentences that included most of the key structures and vocabulary that we had covered (I wiped the board clean before giving the dictation).

I did not do it as a “dictee” a la Ben Slavic, i.e. I just dictated the sentences and collected their papers. 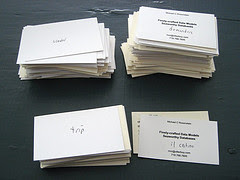 I adapted Rob Waring’s paper “How to get your students to use their dictionaries effectively” (OUP, 2001) and created a worksheet for my university EFL students to help them become more familiar with the various functions and uses (and limitations) of their dictionary.

Rob Waring stresses that it is best if all students have the same dictionary when you give them this kind of dictionary training. These days, tho, almost every student has one of several types of electronic dictionary, so getting everyone to buy or use the same type is unrealistic.

It takes about 40 minutes to work through the worksheet, though your mileage may vary.

With just a little editing, it could be used as-is for EFL students other than Japanese.

I’m trying to figure out how to best teach vocab to my uni students.
I’ve been playing with the Vocab profiler, and have input the first unit of all the textbooks I’m using, and separated out the 1k words, the 2K, the AWL ones, and the off-list.

I also want to give some basic dictionary training, adapting Rob Waring’s suggestions. I think that should cover me for tomorrow, he-he-he.
I’m also going to give them Nation’s 1K vocab level test, and another one next week. Most students know about 1,500 – 2,000 words I would say, but their knowledge is spotty, and needs reviewing.
I don’t just want to focus on reviewing the top 2,000, tho, I want to move on to AWL, particularly in the fields my students are majoring in (Economics, Informatics, Engineering).

Just because I have them, I want to assign Rob Waring’s receptive test AND productive test. Well, it would be a more accurate measure (for me) AND it would, ok, might, bring home the point that there is a difference between the two, and which one to focus on is more a matter of personal goals than course requirements (is it realistic to require students to master 5,000 words of productive vocab when they and I both know they are highly unlikely to ever need English in their lives ever again after graduating?).

At my present rate, I’ll be doing dictionary training and vocab testing on the top 1,000 words for the next 3 months….
I’m getting lost in the forest.

I missed Paul Nation in Tokyo the other day, but thanks to sista k, I discovered

Miss one, get three free!

Damn! I missed it.

Inspired by reading Paul Nation’s tome on Learning Vocabulary in Another Language, I’ve been surfing the ‘Net and tagging all kinds of goodies with vocabulary and extensivereading. Rob  Waring, who’s made an extensive study of um extensive reading (and  listening) and vocabulary learning. On his page of Word Frequency Lists, he writes Interested in Corpora? Then Mike Barlow’s website is the best there is.
I click and discover the double coincidence that a) Mike Barlow is based in Auckland, NZ, which I visited 15 months ago, and 2) that he isn’t in Auckland today but is in Tokyo to present at the Intensive Course in Corpus Linguistics with none other than Paul Nation.