To redress the balance a bit… I attended 7 presentations. Two were very good.

One was the account of the new software to teach large Accounting classes, which I wrote about before. His presentation came right after an awful one which was so full of jargon that no-one else understood it, either. He started out slowly, taking time to relate his subject to knowledge we already knew*, situating it in context. His slides were simple, had (relatively) less text, and were more focussed – having one key point (mostly). He kept good eye contact, and generally gave the impression he knew that he was talking to real, live people. He used some humour. He seemed relaxed and not in a big hurry (most of the others were just so obviously in a race against the clock).

The other good presenter started off in the same way: nice and slow with lots of background. All the presentations were limited to just under 20 minutes, with a bell sounding after 5, then after 10, etc. I remember being surprised, and a little anxious on behalf of the two “good” presenters, when the 5-minute bell rang and they were just coming to the close of their introduction, yet neither of them seemed perturbed or concerned: all was obviously going to plan.

So, lots of background and in the process, giving the audience time to relate what was being said to their own knowledge and experience. The second presenter also used self-deprecating humour, which showed maturity and confidence. The second presenter did not use powerpoint (tho I can’t be sure): they didn’t look like Powerpoint slides, but more like simple screenshots of his own website (which was the subject of the presentation). Each slide was focussed and contained just the info the speaker wanted to illustrate, and no more. There were graphics, sparingly and tastefully used and always to illustrate (sorry!) the point being made, never to “jazz up” the presentation. Colour was used, in the same way. The colours and images helped reduce the domination of text, which, as a non-native speaker of Japanese, I greatly appreciated.

Unfortunately, there was a blemish: this second presenter, along with just about everyone else, had the “kids these days” habit. The main point of the presentation was handouts and using a website as a resource for students and as a tool of professional development (giving yourself a web profile). The presenter pointed out how handouts had evolved over the years, and that “kids these days” could not tolerate text-only handouts, or only paper handouts: they needed stuff in colour, they needed graphics, they needed digital content (and, yes, I’m afraid he threw in the old chestnut about diminishing attention spans).

It wasn’t his fault, of course, but his timing was terrible: I’d just read Atherton on handouts, you see, so I was an expert (I actually had Atherton in my bag at the time: he was very good and did not utter a peep, you’ll be glad to know):

The Internet and Virtual Learning Environment may or may not radically change teaching, but the technology which has probably made most difference in the past fifty years has been cheap, on-site, duplicating copying and printing. Among other things, it has radically changed student expectations — and the more conversant teachers become with computers and printing, the higher the expectations get.

So, nyah: students’ demands and expectations might be about more than the inherent mental and physical shortcomings of today’s “yoof”. 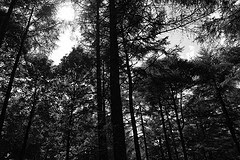 Today I attended an “IT in Education” conference in Tokyo.

I’ve been reading James Atherton’s site, and came across these pages on technology (in education) in general and handouts in particular. A couple of points:

I was reminded of these 2 points in today’s presentations. Everyone talked about using technology to do things we already do, only more efficiently. No-one talked about how the technology impacts the process of learning. Only one gentleman touched on this briefly. In a presentation on an Excel application used to teach large classes Accounting, the presenter pointed out the advantage: previously calculations were written out by laboriously by hand on the blackboard and this took a lot of time. Now it can all be done much more quickly using this software and a large projector and screen. In the Q&A time, a member of the audience pointed out that, while writing on the blackboard may take time, it also allowed students time to take notes. Now with these Excel spreadsheets on screen and the caculations being entered automatically before your very eyes, there’s no time.

So “saving time” is an advantage purely from the teacher’s point of view; the point of view of class management, of delivery of content.

This is a point also made by Atherton (altho he is writing about handouts):

Copying from the board is no longer necessary, and even note-taking from verbal presentations diminishes in importance. … To a certain extent, the teacher’s position is restored. But the handout tends to be used less for the individual teacher’s distinctive angle on the material, as to pare (or even dumb) down the material simply to what you need to know for the purposes of this particular course.

It’s perhaps worth mentioning here that all the presentations referred to the present situation of university teaching in Japan, which means a continual moaning about the falling academic standards of entering students, so perhaps dumbing down is a quite deliberate attempt by teaching staff, to desperately reach those students that regular teaching cannot reach. Back to Atherton.

After all, what is being done with the time which is being saved? Students no longer have to copy from the board, or even take notes….this is not merely about the teacher transmitting knowledge: it is also about ownership of it. (my emphasis)

Another complaint I had was one I frequently feel when attending Japanese academic conferences: the heavy focus on unique, specific case studies or examples, with little or no attempt to draw general conclusions which might apply elsewhere (and so be of some value to the audience).

One example: one presenter described an attempt in a computing class to improve students’ understanding and motivation by requiring them to create quiz items on the subject of the day’s lecture (in fact, 4-item, multiple-choice quiz problems). The presenter made no attempt to draw some general conclusions or principles from his success. He might have mentioned the old adage that the best way to learn something is to teach it. He might also have mentioned the *Socratic Method. So, to replicate this success we would need to…. assign 4-item, multiple-choice quiz problems on computer networks? Or come up with activities that require students to reformulate in some manner what they have just heard/read/seen, or perhaps to compare and contrast or apply their knowledge to solve a problem?

This presenter was typical.

And while I’m at it, I lost count of the number of times a presenter said “Erm, sorry, the text is a little small…” None of them have read Seth Godin, or Guy Kawasaki. Text, all text, WHICH THEY THEN READ. At breakneck speed because they only had 13 minutes!!

The smarter ones highlighted the key text on each slide in red. The other used laser pointers, so if you blinked, you missed where the key part was. And when they did use graphics, it was something like the plan for Buckingham Palace on 1 slide. To fit, everything had to be kinda small…. When they actually brought these images up, it became obvious that they would be hard to see by the people further back than the front 5 rows…. AARRRGGGHGG!!

*The first schools in Western cultural tradition were those of classical and early post classical Greece. Those schools were not for the purpose of benefiting students–and even to promulgate a particular “school of thought” was secondary. Their main purpose was to provide quality audiences to whom the leading thinkers and perceivers could describe their perceptions, in order to develop further those perceptions. Some of the “nicer guys” among these, the Sophists especially and Socrates in particular, would return the favor and draw out their listeners in turn. Their doing so, and the various ways they did so, became known as “Socratic Method.”(Win Wenger)

From a link on Harold Jarche’s blog, I discovered Garr Reynold’s blog in which he recently analyzed some presentations given at the TED 2006 conference.

Well, today in my Google Reader was a link to Jay Cross’ Google Reader Shared Items page, and no 2 was Al Gore’s presentation at TED 2006.

I have yet to see An Inconvenient Truth, but I’m already one of the converted (have been since I was about 16 when I did my own research after reading Rachel Carson’s Silent Spring), and I strongly agree with Gore:

“The climate crisis will only be stopped by an unprecedented and sustained global movement”, Gore said

and the Internet is one way this global movement can happen at the speed it needs to happen and reaching the critical mass of people it needs to reach.

I didn’t get much of an impression of Gore while he was Vice-President, but I recently saw him on Japanese TV, interviewed by a gaijin TV “talento” who revealed in the interview that he was a graduate of Al Gore’s alma mater. Al Gore had obviously done his homework on the program that was interviewing him; not only that but he also talked about the Japanese kanji for “crisis” and how it includes a character that means opportunity （the second of the compound character “kiki” meaning crisis – 危機）, whereas the English word “crisis” only suggests something negative. A smart guy. I was impressed. Check out the video.

And Garr Reynolds is presenting on presenting at the Apple Store in Shinsaibashi, Osaka, Japan on Feb 25th.