I should have waited a bit before blogging my earlier entry, until I’d seen this TED talk by Sir Ken Robinson (a fellow Brit I’d never heard of). Makes a similar point to Michael Rosen but with a lot more power and in less than half the time (20 minutes). (See Ken’s Wikipedia entry and his official website.)

This caught my eye:

Knowsley Council in Merseyside, has abolished the use of the word school to describe secondary education in the borough. It is taking the dramatic step of closing all of its eleven existing secondary schools by 2009. As part of a £150m government-backed rebuilding programme, they will reopen as seven state-of-the-art, round-the-clock, learning centres.

Originally in the British newspaper, the Independent, I found it on the Wales-Wide Web.
Go read Graham Attwell’s blog entry, especially the comments and the links in them.

When you read the material supporting the ‘Knowsley Experiment’, it really is the proverbial Curate’s Egg. There’s some progressive educational theories, spin, Blairite ‘newspeak’, consultants’ verbal diarrhoea, paying homage to Microsoft and the downright dangerous.

and it’s downhill from there, and well-argued (and not very complimentary to American education, either).

Of course, if the testing and “benchmarks” (there, that shows how with-it I am, doesn’t it?) are all still in place and unquestioned, then…

If you watch the beginning of this 45-minute video I blogged about previously, you’ll hear Cambridge University lecturer, Dominic Wyse, tell how

since 1988 and the National Curriculum, politicians have exerted greater and greater control.

Will this tendency suddenly change or lessen? What do you think, boys and girls? 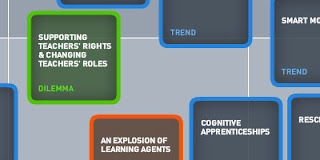 Via Information Aesthetics (a mesmerizing blog, a visual feast), comes this link to an interesting map at Knowledgeworks Foundation & The Institute for the Future

I saw Karl Fisch’s fascinating presentation a while back, but was amazed to see its slick new look. I discovered this thanks to John Farr’s excellent blog. Karl’s presentation and Scott McCleod’s movie have really gone viral, because John Farr is not an edtech blogger and lives far from the madding crowd in beautiful New Mexico.

Here’s a comment I posted to John’s blog entry:
FYI, the movie in its final form was edited and posted by Scott McLeod, and the original was created by educator Karl Fisch at Arapoahoe High School (wherever that is) as a presentation for his school’s start-of-the-year faculty meeting. History and background are at Karl’s blog The Fischbowl here and here.

The music apparently comes from the movie Last of the Mohicans (starring one of my favourite actors, who has an equally interesting father). The content comes from a number of educators and writers who write about this shrinking world and the role the Internet is playing in that.

The movie is well made and thought-provoking, but it rings a little US-based nationalistic to me. Unlike much of the (US) edtech blogosphere, I’m not a Friedman fan. I am excited about the possibility of a world grass-roots community linked by optic fibre, getting themselves informed and making their voices heard, because global warming and peace are global issues and it’s been blindingly obvious for the past 10 years that our leaders are both unwilling and incapable of leading us where we humans on this beautiful blue planet urgently need to go. (A panel of top scientists were on TV recently debating Prof Lovelock’s Gaia theory on which there were many differing views. On one issue only were these scientists unanimously agreed: governments and political leaders will not make the right decisions in time to save the planet.)

I think we will survive as a species, but that it will be touch and go right up to the last minute. And that minute may come sooner than we think.